The orphanage of Saint Tikhon of Zandonsk for orphans and children from poor families was founded by Saint John of Shanghai and San Francisco the Wonderworker in China, in Shanghai. It official opening was held at the end of December 1934.

In 1948, during the war in China, due to the coming of the Chinese communists to Shanghai, the orphanage was evacuated to the Philippines, to the island of Tuboboa. Among the five thousand Russian refugees in the Phippines, there were 37 people from the orphanage, 21 boys, 10 girls, between the ages of 7 and 18, and 6 teachers, with M.A. Shakhmatova in charge. 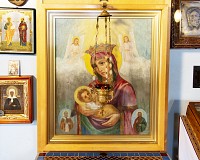 On January 25, 1951, on the feast of the Mother of God, the Milk-Giver, the children arrived in California, to their new home. Saint John had planned this ahead of time, first establishing the “Committee for Assistance to the Orphanage of Saint Tikhon of Zadonsk,” and later also purchasing a house in which the children would be able to live. Here, in a small cell, he lived during the last years of his life, served the Divine Liturgy everyday, nourished his spiritual children, and helped all who were in need.

At the present time the orphanage of Saint Tikhon of Zadonsk (Saint Tikhon's House) is one of the historical, spiritual centers of the Western American Diocese of the Russian Orthodox Church Outside of Russia. Divine Services are performed regularly in the church, diocesan meetings and bishops councils take place, as well as seminars and youth events. There is an active sisterhood in the parish.